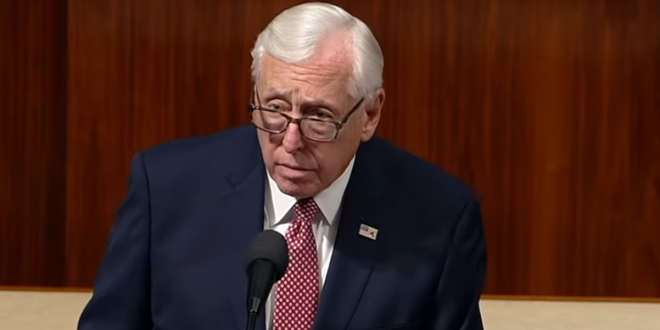 Hoyer: DC Statehood Bill Will Get Vote In US House

From a statement by Rep. Steny Hoyer:

“President Trump’s behavior in the District of Columbia in recent days, as well as his threats to impose his dangerous and callous will on a city about which he has proven again and again he has no understanding of, has underscored in dramatic terms the urgency of giving the District the same constitutional rights and authorities that the nation’s 50 states have had since 1789. DC must be granted statehood. I fully intend to bring Rep. Eleanor Holmes Norton’s bill, H.R. 51, the Washington, DC Admission Act, to the House Floor for a vote this year. The residents of the District must be granted the same protections as their fellow citizens in neighboring states.”

In a year when the House will spend much of its attention on must-pass bills, the promise by Democratic leaders of a vote on statehood for the District of Columbia emphasizes its importance, D.C. Delegate Eleanor Holmes Norton said.

Norton said the current conflict between District officials and the federal government over the military presence in Washington wouldn’t have happened in places like Maryland or Virginia where the governor has authority over the state’s National Guard.

“For 219 years this city has not been equal to the states,” Norton said in an interview with CQ Roll Call. “So whatever else happens with respect to the virus and police reform, this is even more important history because it goes to the way in which our republic is formed.”

It’s official!!! Big thanks to @SenJackyRosen for standing with & up for the 700,000+ people in DC by cosponsoring the #DCStatehood bill! https://t.co/VeXSiDSst6 pic.twitter.com/vdIk1VBOMV

Thank you US Sen @SenJackyRosen D-NV for cosponsoring US #VotingRights #DCstatehood #S631 2019! It helps DC pop, US Senate democracy, & @JoeBiden.