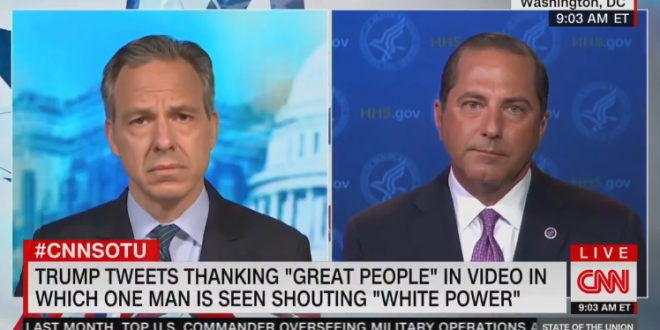 “I’ve not seen that video or that tweet, but obviously neither the president, his administration nor I would do anything to be supportive of white supremacy or anything that would support discrimination of any kind. I’ve been here getting ready to speak to you.

“I’ve not seen that, and so I don’t want to comment further on that. But obviously the president and I and his whole administration would stand against any acts of white supremacy.” – HHS Sec. Alex Azar, moments after CNN host Jake Tapper played the fucking video for him.

“Well, I just played it for you but let’s move on,” @jaketapper says to Alex Azar who refused to comment on the white power video

Tapper: I’m stunned Trump would tweet that. I assume that that’s not a message you stand by.

Tapper: Well, we just played it for you, but I’ll move on. pic.twitter.com/ldt49HKK3h