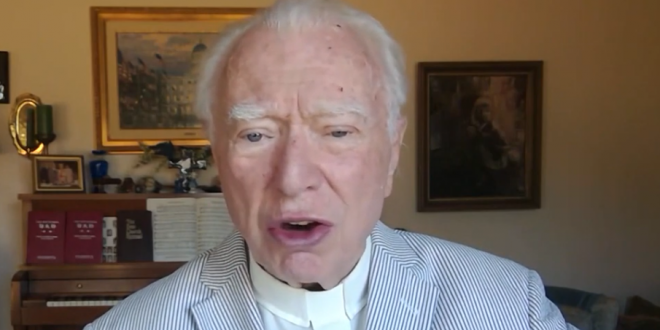 Rev. Louis P. Sheldon, who founded the Traditional Values Coalition, a lobbying group that was largely known for opposing homosexuality and gay rights, died Friday. He was 85. Sheldon, a former Anaheim resident, died in Southern California of a longstanding condition, son-in-law James Lafferty said. He did not provide details.

Sheldon lived in California but commuted weekly to Washington and was close to political leaders, including former House Speaker Newt Gingrich, Lafferty said.

Sheldon and his daughter visited the White House nearly 70 times and personally met eight times with President George W. Bush, according to the Southern Poverty Law Center, which in 2010 designated the Traditional Values Coalition as an anti-LGBT hate group.

Sheldon last appeared on JMG in 2013 when he spearheaded a letter in which a coalition of hate groups warned they would leave the Republican Party if opposition to same-sex marriage was dropped. In recent years his hate group has been run by his daughter, Andrea Lafferty. His 2005 book, The Agenda: The Homosexual Plan to Change America, is regularly cited by the enemies of civil equality.