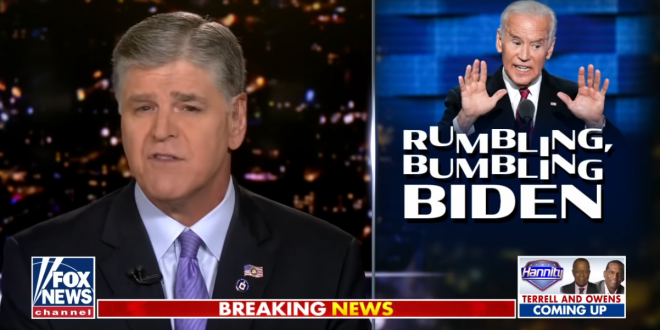 “Joe Biden, Is he really fit to serve as the commander in chief? They asked this question in 1984 about Ronald Reagan, but does Joe Biden have the mental alertness? Does he have the stamina? Does he have the strength to take on what is the hardest job in the world?

“And by the way what’s going to happen when he finally has to leave his basement bunker for good and when will the media after 88 days without a press conference start demanding that he do so? A Rasmussen poll just out shows 38% of all voters think that Biden has some form of dementia and that includes 20% of Democratic voters.

“Will the mob and the media, will they ask Biden the same questions they asked Reagan about age and mental acuity? And don’t hold your breath because guess what? In fact don’t expect Biden to leave the basement, they’re not even asking him to.” – Sean Hannity, last night.