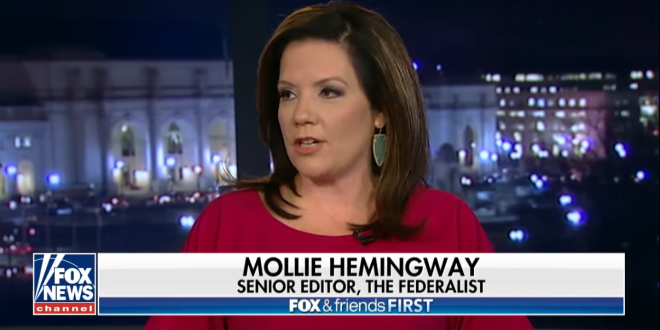 Fox News Contributor: The Man That Shouted “White Power” In Video Shared By Trump Was Being “Sarcastic”

“And this is something where this is a very big issue right now. And we need the media to really do a good job, rather than provoke racial conflict. You have a lot of people advocating hatred toward white people, or you have responses like this, and it needs to be very careful.

“I think the media seem to want to promote conflict, rather than to remind people that this is a wonderful country where people get along very well, and where we are, you know — we are the best country in the world on some of these things.” – Fox News contributor and Federalist editor Mollie Hemingway.

Hemingway last appeared on JMG when she announced the name of the Trump/Ukraine whistleblower during a live Fox appearance.

Previous Starbucks Joins Facebook Ad Boycott Over Hate Speech
Next Biden: Trump Has Picked A Side And It’s “White Power”