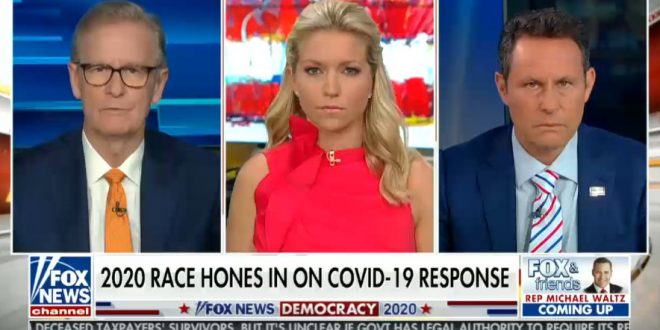 On June 26, Fox & Friends co-host Steve Doocy commented that “125,000 Americans have died so far” of COVID-19. However, most discussion of the “jaw-dropping” number was a setup to mock Joe Biden for accidentally saying that “over 120 million” have died, even though co-host Ainsley Earhardt also clarified (once) that Biden “corrected himself immediately.”

According to a Media Matters analysis, Fox & Friends’ June 26 mentions of the national COVID-19 death toll were the first time the show mentioned it since at least June 18, when it was brought up briefly by Sen. Ted Cruz (R-TX) — not the hosts — in response to a question about unemployment benefits.

Fox & Friends treated the 125,000 confirmed American deaths from coronavirus as little more than the setup to criticize Biden, and guests used his misstatement to speculate about his alleged “dementia” and “mental impairment” — even though Earhardt seemed to admit that the error was insignificant.