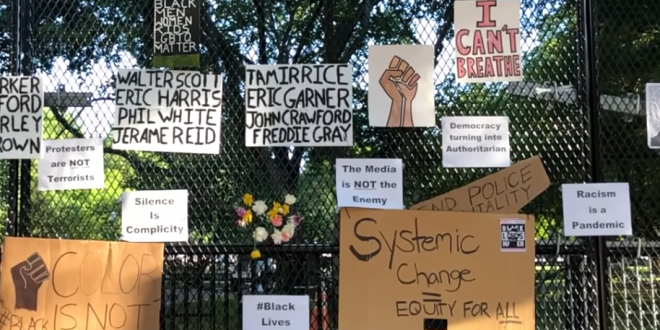 Floyd Protest Signs To Be Curated For Museum Exhibits

The demands for an end to police brutality and protection of civil rights for Black Americans on signs clutched by protesters as they marched on the nation’s capital are finding their way to historic preservation.

The African American History and Culture Museum, the American History Museum and the Anacostia Museum have formed a coalition with staff, activists and members of the community curating remnants of a movement long simmering but reignited after George Floyd was killed by Minneapolis police Officer Derek Chauvin on May 25, on video.

Signs and other ephemera were plastered for days along steel fences erected at the northern flank of the White House. As the barricades came down, grassroots calls for conservation went up and many of the messages adorning Black Lives Matter Plaza were relocated by hand half a block away as activists and curators began engaging.