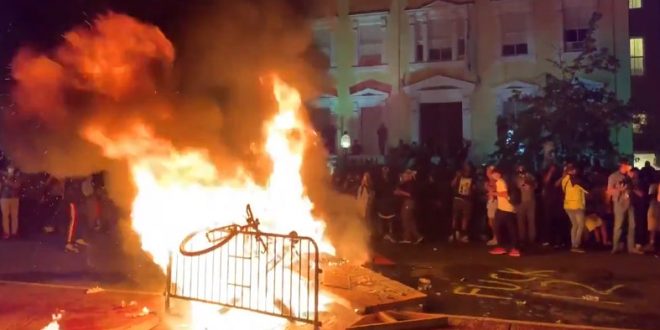 Fires Set Near White House In Sixth Day Of Unrest

Firefighters in Washington, D.C. responded to numerous blazes set intentionally by protesters in the city Sunday evening as protests over the death of George Floyd in police custody moved into their sixth day nationwide.

Multiple news outlets reported that a fire erupted at historic St. John’s Church, a landmark where presidents have attended services since the 1800s, while others nearby were set at a White House guard building and other locations, including the AFL-CIO’s national headquarters.

Rioters have lit the secret service guard shack on fire RIGHT OUTSIDE the White House. This is getting out of hand. 40 secret service agents are injured. #Riot2020 pic.twitter.com/Fot0ZB3hHH

DC, 10:18 pm. Fires have spread to the trees in front of the White House. #DCProtests pic.twitter.com/NdOBeoxXg6

The AFL-CIO headquarters a block north of the White House has been ransacked. There’s a fire in the lobby, all the windows are smashed and I can hear sprinklers going off. DC Fire haven’t been able to come anywhere near this area. pic.twitter.com/kpw1Jqgfgt