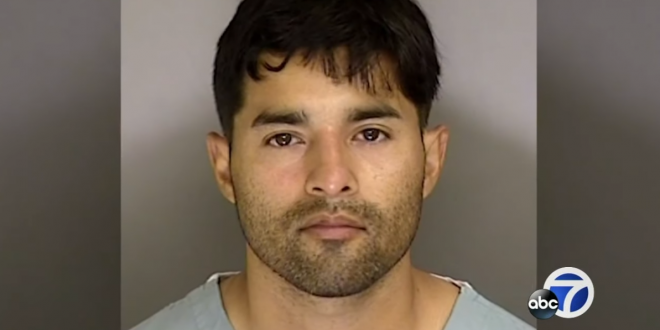 The FBI announced Tuesday that Air Force Staff Sgt. Steven Carrillo has been federally charged with murder and attempted murder in the case of a federal security officer who was killed in a drive-by shooting on May 29 outside the Federal Building in Oakland.

Carrillo is the suspect charged with killing Santa Cruz Co. Sheriff Deputy Damon Gutzwiller and wounding of four other officers in an ambush-style attack on June 6 in Ben Lomond.

In addition, the FBI has arrested a suspected accomplice, Millbrae resident Robert Alvin Justus Jr. He is federally charged with aiding and abetting in the murder of 53-year-old federal officer Dave Patrick Underwood and attempted murder of a second security officer, who was critically injured in the Oakland shooting.

Authorities have officially linked the crimes to the so-called “Boogaloo” movement, a self-described libertarian anti-government citizen militia that is preparing for a supposed looming civil war. The messages “Boog” and “I became unreasonable” were scrawled in blood on the hood of the vehicle, authorities said, in presumed reference to the movement. Police also recovered a patch with a Boogaloo symbol inside the van allegedly used in both crimes.

Authorities also found a ballistic vest located inside one of Carrillo’s two white vans, with a symbol of an adulterated American flag with an igloo in place of the 50 stars. It is a common symbol of Boogaloo, authorities said. The loosely organized group has also been linked to recent attacks on law enforcement in Nevada and Texas. A former friend Justin Ehrhardt told this news organization that Carrillo’s Facebook page was rife with memes related to the ideology.

“We believe Carrillo and Justice had chosen this date because the planned protest in Oakland provided an opportunity for them to target multiple law enforcement personnel and avoid apprehension to the large crowds attending the demonstrations, as described in detail in the complaint,” Jack Bennett, special agent in charge of the FBI, said at a Tuesday press conference.

Authorities said Carrillo used “his own blood” to write phrases linked to the so-called “Boogaloo” movement on hijacked cars associated with the killing. U.S. Attorney David Anderson described the movement as one “used by extremists to reference a violent uprising or impending war in the United States.” Charging documents allege Carrillo shot at the deputies while throwing pipe bombs at them.

The evidence linking the two crimes was a white 1992 Ford Cargo van. U.S. Attorney David Anderson said the same van was used in both crimes. An AR-15 rifle recovered at the Santa Cruz crime scene was used in both shootings. Federal officials described the AR-15 as a ‘ghost weapon’ — a gun self-built from parts.

The “boogaloo” term comes from a 1984 cult classic movie “Breakin’ 2: Electric Boogaloo,” a phrase which is used to signify parody when appended to a topic. The boogaloo movement’s anticipation of a second civil war in the U.S. generated the phrase “Civil War 2: Electric Boogaloo.”