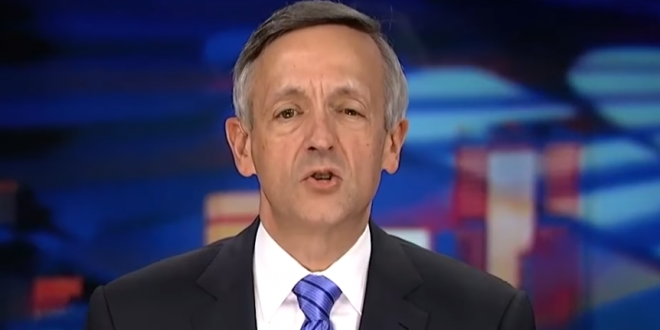 “There’s just been a trifecta of bad circumstances that have formed a perfect storm: the pandemic, the economic fallout from the pandemic, the lawlessness and riots in the streets, … [but also] the unrelenting and unprecedented criticism from the mainstream media,” Jeffress tells OneNewsNow.

Jeffress argues that even though none of the chaos is the president’s fault, he’s still taking heat from voters, particularly Christian voters. “The fact is most people – and I have to say it, most Christians – are weak when you get down to it. They are very weak,” he laments.

“They bow with public opinion, and they don’t want to be thought of bad by other people. And so they just go back and forth … and I think all of that is contributing to this drop in the polls that we’re seeing.”

Jeffress has said that all Jews and Mormons go to hell, that Obama was the precursor to the antichrist, that LGBTs need rescuing from Satan’s deception, that God designed the borders of the United States, that there will be civil war if Trump is removed from office, and that God gave Trump the moral authority to have foreign leaders assassinated. In April, Glorious Leader promoted his online Easter service.