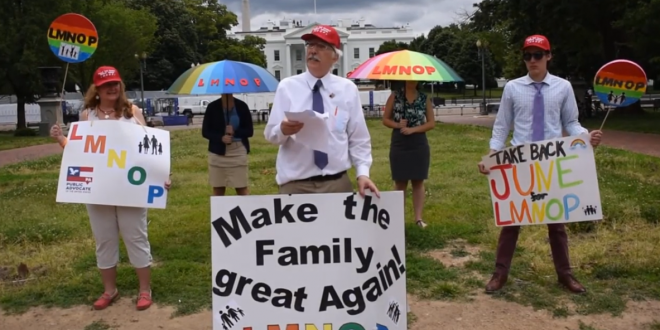 A break from the news courtesy of reliably crazy Eugene:

Public Advocate demonstrated in Lafayette Park (photo), where President Trump spoke in front of a boarded up church Bible in hand, in support of LMNOP Month, in front of the White House.

The area has a giant 10-foot fence installed but Public Advocate posted a video announcing a new project from opposite the White House well before the fence and demonstrators arrived.

You all know that June is claimed to be the LGBTQ month, well, not anymore, Public Advocate has launched: JUNE IS LMNOP+ MONTH. Americans are tired of, and Public Advocate condemns, violent domestic terrorists burning our cities down.

We condemn the wrongful death of George Floyd in Minneapolis, Minnesota by a corrupt police officer and support the right of peaceful demonstrations. Public Advocate practices peaceful events for 40 years including here at Lafayette Park.

Pro-family Americans are asked to take back the month of June with the new LMNOP+ Movement, announced here and now by our White House “Make the Family Great Again” task force.

The letters LMNOP represent most Americans. As follows: L is for Lifestyle of, M stands for Mainstream, N for Normal, O for Ordinary and P for people. That’s Lifestyle of Mainstream Normal Ordinary People.