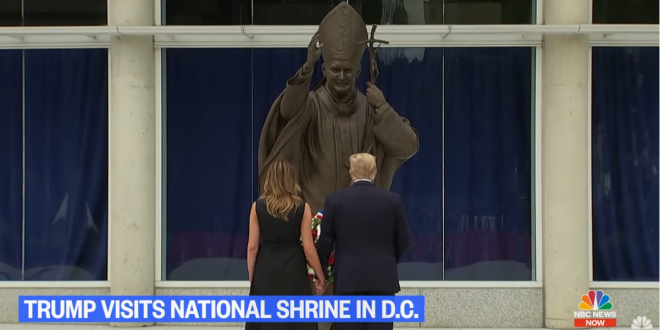 President Donald Trump visited a D.C. shrine honoring Pope John Paul II on Tuesday, a day after his appearance in front of an Episcopal church across from the White House set off a controversy because it involved aggressively clearing peaceful protesters.

In a statement Tuesday morning as the president was arriving, Washington Archbishop Wilton Gregory slammed the visit and the tactics Trumped had used for the photo opportunity at St. John’s Episcopal Church.

“I find it baffling and reprehensible that any Catholic facility would allow itself to be so egregiously misused and manipulated in a fashion that violates our religious principles, which call us to defend the rights of all people even those with whom we might disagree,” Gregory said.

As Trump visits the St John Paul II National Shrine today, I hope someone proclaims today’s Gospel (Mark 12:13-17) where Herodians and Pharisees are called out for their hypocrisy.

Among the signs greeting Trump on his motorcade ride to Saint John Paul II National Shrine, in addition to one-fingered salutes:

Trump is making his way to the Basilica of the National Shrine of the Immaculate Conception here in my neighborhood of Brookland in NE #DC the protesters are assembled and waiting. #DCProtests pic.twitter.com/TFdqW30w8k