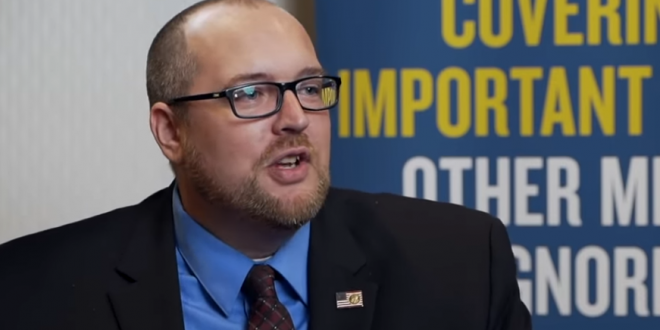 The primary account of Carpe Donktum, a prominent pro-Donald Trump meme maker, has been permanently suspended by Twitter, which cited “repeated” violations of copyright infringement. Twitter’s move to kick Carpe Donktum off the platform came just days after a video from the account — tweeted by Trump — was pulled after a copyright complaint from the original video’s owner.

Twitter previously had removed several Carpe Donktum videos after receiving DMCA takedown notices for copyright infringement, including one shared by Trump in February 2019 lampooning congressional Democrats during the president’s State of the Union speech that included R.E.M.’s “Everybody Hurts.” Carpe Donktum, whose real name is Logan Cook [photo], immediately created a new Twitter account (@CarpeDonkutm) and complained about Twitter’s “censorship.”

@CarpeDonkutm has also been banned. As you can see, this latest banning is prompting Trump’s ballwashers to vow that they are leaving for the far-right platform, Parler, which is slightly less Nazi-infested than Gab.

10 years on Twitter.
I’m done.
Disgusted with the censorship on this platform.
Twitter is now so aggressively ANTI Free Speech, it’s not fun anymore.
Just got on @parler_app.
It’s refreshing, not like this communist gulag dumpster fire.
I’m @BennyJohnson on Parler.
Go there for🔥

I’m on Parler as @seanmdav. Be sure to follow me there if you’re sick and tired of the constant attempts by Twitter’s incompetent left-wing executives to turn everything into a thoughtcrime. https://t.co/IXrt70lWag

So, Parler it is. pic.twitter.com/UVTY0CBAcq

Engagement on Parler is absolutely nuts. Some posts get more views than on here. Essential you sign up. https://t.co/JBOluLFehc

Previous Bill Barr Agrees To Testify Before House On July 28th
Next Southern Baptist Leader Al Mohler: Trump Is A “Huge Embarrassment” But The Alternative Is “Unthinkable”