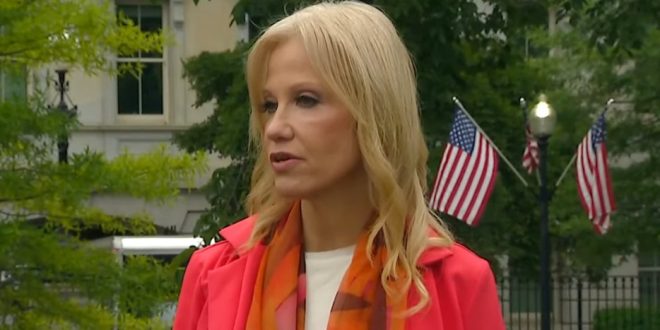 “If it’s adults, even if it’s registered voters. Likely voters, I’ve said for decades as a pollster, you’re really going to want this one.

“The worst way to find out if somebody’s a likely voter is to ask them ‘Are you likely to vote?’ Yes, and I pay my taxes and I go to church every Wednesday and Sunday, I do sit-ups every morning. Vote? I’ll be there.

“I think you have make people feel comfortable to tell you that either they haven’t voted or why they feel more motivated this year.” – Kellyanne Conway, in response to a question about Biden leading in the polls.

Kellyanne Conway says Trump campaign never did a single national poll when she was campaign manager because she sees them as “a colossal waste of money.” She says in swing states, main thing she sees is “Biden and Trump in relatively close proximity to each other, under 50%.” pic.twitter.com/svioFan6hE

The Trump administration, and particularly Conway herself, regularly makes up stories and facts across a wide array of issues. pic.twitter.com/f3QklFbGDB

“President will win Iowa again," and Joni Ernst will, too, Kellyanne Conway predicts, after Iowa Poll shows Biden within 1 pt of Trump and Ernst’s challenger up 3.

She says people mislead pollsters about whether they plan to vote, so pollsters may sample some who won’t vote. pic.twitter.com/AG5dPjpmwF

Previous NEW YORK: Gov. Cuomo To End Daily COVID Briefings
Next Homocon “Walk Away” Leader Claims He Was Ejected From Flight To Trump Rally For Refusing To Wear Mask