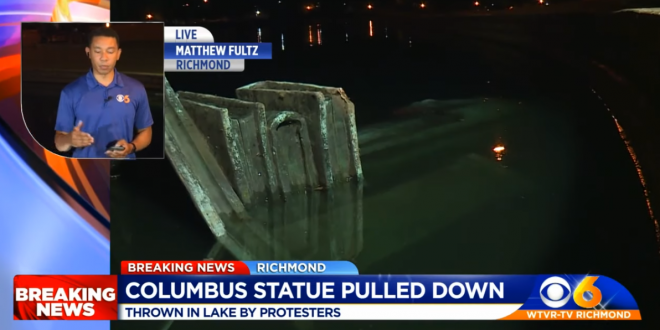 About a thousand protesters gathered around the city’s monument to Christopher Columbus in Byrd Park on Tuesday evening to stand in solidarity with indigenous peoples. After about seven speakers, the crowd began to march down Arthur Ashe Boulevard, chanting “take it down.” Less than two hours later, they did just that.

Upon returning to Byrd Park after the march, protesters used ropes to pull down the approximately 8-foot statue, then moved it some 200 yards across the road at the Arthur Ashe Boulevard entrance and submerged it in Fountain Lake. According to a social media post, the statue was briefly set on fire.

This statue has been the target of vandals in the past. It was doused with red paint back in June 2015 with the words “Black Lives Matter” spray-painted on the base. There has been a push across the country to get rid of the Columbus Day holiday in October and replace it with Indigenous Peoples Day.

BREAKING: A statue of Christopher Columbus in Byrd Park has been removed by protesters and dragged into the lake. This is a developing story. pic.twitter.com/yFjiUdPTMk