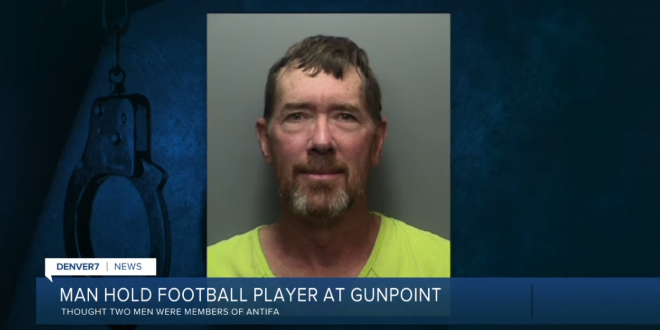 A Loveland man has been arrested for allegedly holding two roofing salesmen at gunpoint because he thought they were members of antifa. On Thursday at 6 p.m., Loveland Police Department officers responded to the 600 block of Dawn Court on a report of a caller seeing two members of the militant antifa group.

The caller said the men were wearing dark clothing and masks and that he would track them down and hold them for the police, the release said. A short time later, another caller reported that a man wearing tactical gear and armed with a rifle was holding two people on the ground at gunpoint.

When officers arrived in the 2400 block of Dawn Court around 6 p.m. Thursday, they encountered Scott Gudmundsen dressed in fatigues and holding two men on the ground at gunpoint, Shaffer said.

But the men weren’t troublemakers – they work for a local roofing company and were wearing blue polo shirts with the firm’s name on them, shorts, tennis shoes and white surgical-style masks, Shaffer said.

One of them is a Colorado State University football player who is 20 years old and works part-time at the roofing company. The student is a “man of color,” according to a statement from the university.

Gudmundsen faces two felony charges. The salesmen had been working in the neighborhood after a damaging hailstorm.