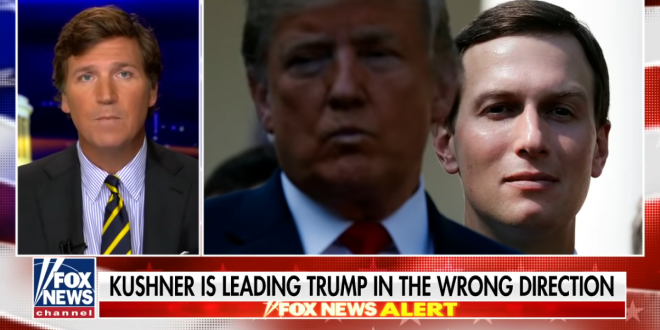 Carlson: Jared Kushner May Cost Trump The Election Because He’s Holding Trump Back Against Protesters

Tucker Carlson, the Fox News host, expressed dismay at President Donald Trump’s leadership on Monday, criticizing the president’s handling of mass protests that have engulfed cities across the country and singling out an influential member of his family. Jared Kushner was just one of some unnamed “key advisers” who Carlson said “don’t seem to understand the gravity of the moment,” not only for the country but also for Trump’s reelection prospects.

“‘No matter what,’ they’ll tell you,” Carlson said of a handful of advisers around the president, “‘our voters aren’t going anywhere. The trailer parks are rock-solid. What choice do they have? They’ve got to vote for us.'” He continued: “Jared Kusher, for one, has made that point out loud. No one has more contempt for Donald Trump’s voters than Jared Kushner does.” Carlson added that Trump’s reelection was at risk unless he shored up his response to the protests.

Fox News has turned off comments on the clip.

“You can regularly say embarrassing things on television. You can hire Omarosa to work at the White House. All of that will be forgiven if you protect your people. But if you do not protect them..then you’re done.”

Tucker Carlson rips into our leaders:

“Weakness invites aggression… If you let people spray paint obscenities on City Hall, pretty soon they are overturning cop cars. If you put up with that, they’ll come right through the door of the police precinct and burn it down.” pic.twitter.com/tc39phngJp

Tucker Carlson is targeting Kushner on his show right now. Some Trump backers have been after Kushner throughout the day, in part for his role in crafting the GOP platform and in part for what others say is his role in keeping the president from delivering an address before today

“No one has more contempt for Donald Trump’s voters than Jared Kushner does, and no one expresses it more frequently,” Tucker Carlson said on his show that Trump watches closely tonight. Carlson says Trump showed he wanted to “crack down on rioters,” but was talked out of it.

Previous Rubio: Protesters At WH Got What They Deserved
Next Trump Campaign Readies App Should Twitter Ban Him