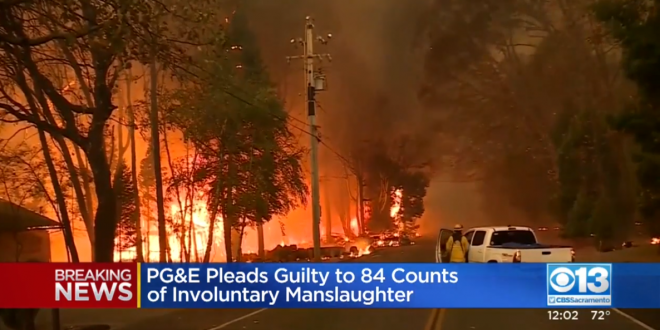 Staring at pictures of the faces of 84 people killed in a deadly fire sparked by his company’s equipment, Pacific Gas and Electric’s chief executive on Tuesday pleaded guilty to 84 counts of manslaughter and one count of recklessly starting the most destructive wildfire in California history.

“PG&E will never forget the Camp Fire and all that it took from the region. We remain deeply, deeply sorry for this event and the tragic consequences,” PG&E CEO Bill Johnson said in Butte County criminal court Tuesday morning.

Standing before Butte County Superior Court Judge Michael R. Deems, Johnson acknowledged that his company’s equipment sparked the deadliest fire in state history, destroying the towns of Paradise and Concow and burning about half of Magalia, an unincorporated community in Butte County.

It is unusual for corporations to plead guilty to felonies and acknowledge that their negligence caused the deaths of dozens of people. What is perhaps even stranger is that this is not the first time in recent years that PG&E has pleaded to or been found guilty of serious crimes. But the relatively small size of PG&E’s financial penalties could rekindle concerns that large corporations often escape appropriate punishment for their actions.

A felony conviction can deal a mortal blow to certain kinds of businesses. Arthur Andersen, an accounting giant, went out of business after it was found guilty in 2002 for obstruction of justice. Clients stopped doing business with the firm and employees left. The Supreme Court later overturned the conviction. But PG&E is a state-regulated monopoly and most of its customers cannot switch to another provider of electricity and gas.

Besides the mass killings, PG&E also will plead to one felony count of unlawfully causing a fire. No executives will be charged, so no one will be imprisoned for the crimes. PG&E instead will pay a maximum fine of $3.5 million in addition to $500,000 to cover the county’s costs of the criminal investigation.

“On behalf of PG&E, I apologize, and I apologize personally, for the pain that was caused here,” Johnson said. “We can’t replace all that the fire destroyed, but we do hope by pleading guilty, by accepting accountability, by compensating the victims, we can honor those who are lost and help this community move forward.”