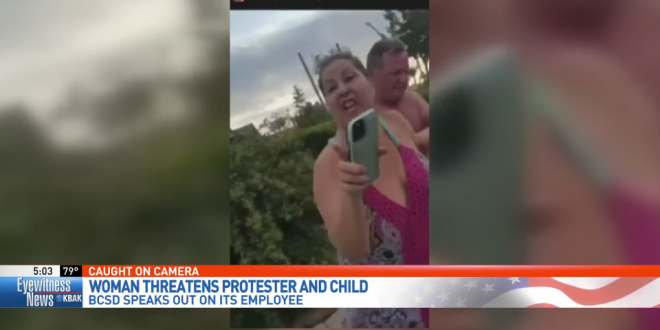 Police are investigating an incident where a woman verbally attacked an 8-year-old girl and her mom when they were returning home from a Black Lives Matter protest. The mother caught the exchange on video.

In the video recorded by her mother, Erika Baze, you hear the little girl sobbing in fear. As the video continues, you hear her inconsolably telling her mother she’s scared. She said they were walking back to their car when they were confronted by a woman.

Baze said the woman told them they weren’t welcome in the area and that she was going to call the police. The mother says the woman tried to get violent, so she started recording video. At one point, the woman says “I will f-ing kill you” before her shirtless husband drags her away.

A Wayside Elementary school teacher has apologized for her behavior caught on camera. Carrie Maxwell, a second-grade teacher, is at the center of a video, seen harassing a mom and daughter leaving a protest Friday night. Another video surfaced of Maxwell peering above her fence, shouting at protesters as the walked by on the sidewalk.

She said she was “heartbroken” to think that her students or their parents may see the video and believe that her behavior reflects her “values or views regarding race or inclusivity.”

“I want to offer my sincerest apology to anyone who was hurt by my behavior in that video,” Maxwell said. Bakersfield City School District Superintendent Doc Ervin said the district is investigating the incident involving the teacher.

The woman allegedly told protesters to leave the country and threatened that her son was on the way to shoot them in the head.