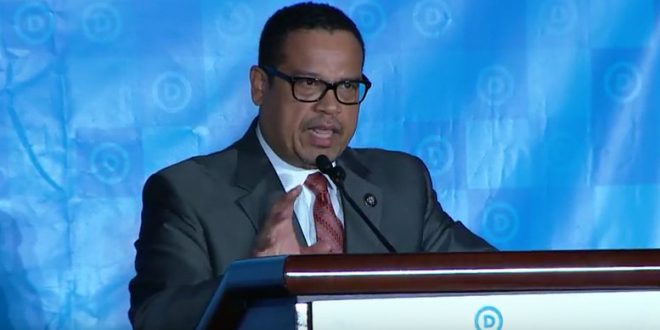 Attorney General Keith Ellison [photo] plans to elevate charges against the former Minneapolis police officer who knelt on George Floyd’s neck while adding charges of aiding and abetting murder against the other three officers at the scene, according to multiple law enforcement sources familiar with the case.

Ellison is expected to provide an update this afternoon on the state’s investigation into Floyd’s death. According to sources, former officer Derek Chauvin, recorded on video kneeling on Floyd’s neck as he begged for air on May 25, will now be charged with second-degree murder.

The other three officers at the scene — Tou Thao, J. Alexander Kueng and Thomas Lane — will also be charged with aiding and abetting second-degree murder, according to the sources, who spoke on conditions of anonymity. Chauvin was arrested last Friday and charged with third-degree murder and manslaughter.

Minnesota Attorney General Keith Ellison is increasing charges against Derek Chauvin to 2nd degree in George Floyd’s murder and also charging other 3 officers. This is another important step for justice.