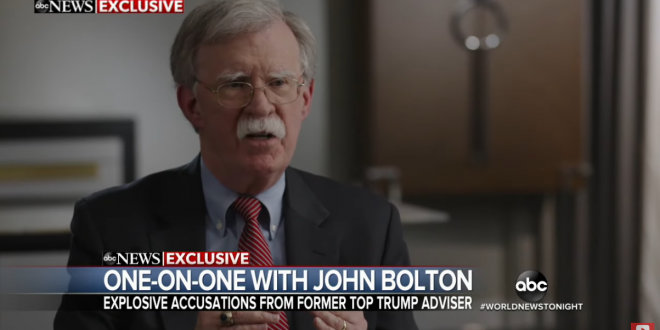 Bolton: Putin Thinks He Can “Play Trump Like A Fiddle”

Former national security adviser John Bolton said in a new interview to promote his new memoir that has rocked Washington that Russian President Vladimir Putin thinks he “can play” President Trump like a “fiddle.”

Asked by ABC’s Martha Raddatz about Trump’s relationship with Putin, Bolton said that he doesn’t think the Russian leader is “worried” about Trump.

“I think Putin thinks he can play him like a fiddle,” said Bolton, who resigned from his position in the administration last September. “I think Putin is smart, tough, I think he sees that he’s not faced with a serious adversary here.”

.@MarthaRaddatz: “How would you describe Trump’s relationship with Vladimir Putin?”

John Bolton: “I think Putin thinks he can play him like a fiddle.”

Watch more from the exclusive interview this Sunday at 9|8c on ABC. pic.twitter.com/196EVYw8ko