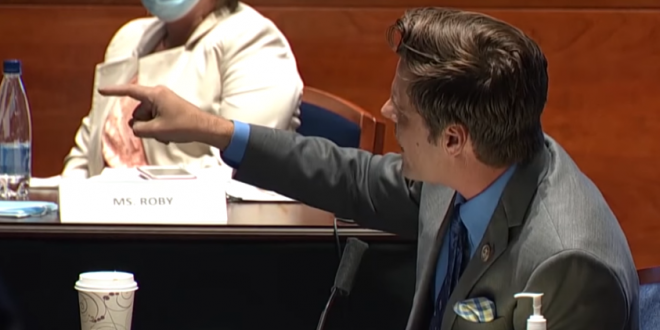 Wednesday’s House Judiciary Committee hearing on police reform blew up when Rep. Matt Gaetz (R-FL) took offense at remarks made by Rep. Cedric Richmond (D-LA) about race, asking the Black congressman “who the hell” he thought he was. The Democrat noted that he was aware that there are GOP congressmen who have Black grandchildren before pointing out that “it is not about the color of your kids” but instead about “Black males, Black people in the streets getting killed.”

“And if one of them happens to be your kid, I’m concerned about him too, and clearly I’m more concerned about him than you are,” Richmond added, causing Gaetz to become irate. (Gaetz is not married and has no children.) “You’re claiming you have more concern about my family than I do,” the pro-Trump congressman shouted. “Who in the hell do you think you are?” After Chairman Jerry Nadler (D-NY) called on Gaetz to cease, Richmond coolly asked Gaetz, “Was that a nerve?”

Watch the clip. Wow. And that brings us to this.

For all those wondering, this is my son Nestor. We share no blood but he is my life. He came from Cuba (legally, of course) six years ago and lives with me in Florida.

I am so proud of him and raising him has been the best, most rewarding thing I’ve done in my life. pic.twitter.com/JB96wzOzYU

As of right now, there is not a single reference to nor picture of Nestor on your campaign website. Which is… weird.

Assuming what you’re saying is true, why have you kept him hidden all this time?

Which is why he never mentioned his son’s existence until now and called him “a student” back in 2016, right?

Who are you trying to fool? pic.twitter.com/VrTT6fdXgP

Nestor turned 19 a few days ago & will be off to University. He arrived here at 12.

As you can imagine, I was triggered when (to make an absurd debate point) a fellow congressman diminished the contributions of Republicans because we don’t raise non-white kids.

NARRATOR: “Matt was, at first, cagey about introducing America to his boyfriend.”