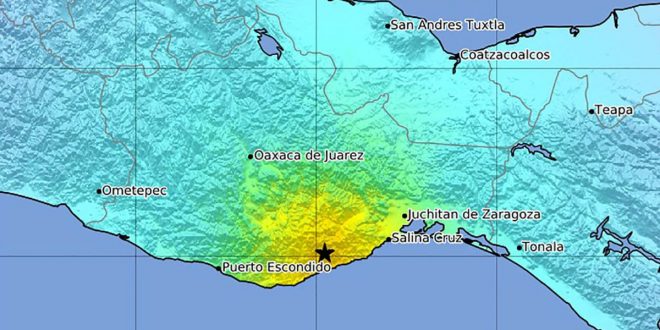 A powerful 7.4 magnitude earthquake has rattled the Mexican state of Oaxaca and prompted tsunami warnings for Mexico and parts of Central America. The quake struck at 10:29 a.m. local time Tuesday about 7 miles southwest of Santa María Zapotitlán, on Mexico’s Pacific Coast.

The U.S. Tsunami Warning System said tsunami waves of 3 to 9 feet above tide level were possible along Mexico’s coast. Smaller waves were possible in other parts of Central and South America. No warning was issued for the United States. A journalist in Mexico City said the quake was felt there, nearly 500 miles away.

A 7.4 earthquake hit southern and central Mexico, causing buildings in Mexico City to sway and thousands to run into the streets. A tsunami warning is in effect.

It was stronger than a 2017 quake that killed over 360 people, but there are no immediate reports of casualties. pic.twitter.com/rjpdFm49yc

7.1 earthquake in southern Mexico epicentered near the coast. This video was sent to me by my family in Villahermosa, Tabasco over 450 km from the epicenter. #earthquake #oaxaca #mexicoearthquake #temblor #Mexico #sismocdmx #sismo pic.twitter.com/cgMAZYRGfF

#BREAKING: A magnitude 7.4 earthquake strikes Mexico. Look at this video of a building in the area where the earthquake happened.#FOX26 #LIVEDESK

Earthquake in Mexico City- still occurring – not sure where epicenter is nor if there is any real damage#Mexico #earthquake pic.twitter.com/rPbxERHytU

The city of Oaxaca shows damage to old buildings in the downtown area after the earthquake this morning.

NOAA issued a tsunami threat for Guatemala, Honduras, El Salvador and Mexico following the strong earthquake off the coast of Oaxaca. #sismo pic.twitter.com/LLzrhiIwcZ

Previous Fauci: I Was Never Told To Slow Down COVID Testing
Next Trump Wants Biden To Take Cognitive Screening Test