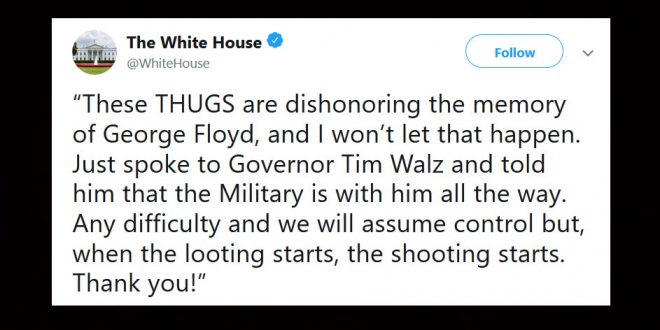 President Trump on Friday called protesters in Minneapolis “thugs” and vowed that “when the looting starts, the shooting starts.” He tweeted after protesters outraged by the death of a black man in police custody torched a police station. The tweet was quickly flagged by Twitter as “glorifying violence.”

“These THUGS are dishonoring the memory of George Floyd, and I won’t let that happen. Just spoke to Governor Tim Walz and told him that the Military is with him all the way. Any difficulty and we will assume control but, when the looting starts, the shooting starts. Thank you!” https://t.co/GDwAydcAOw

Make no mistake: This is the President of the United States threatening to kill Americans.

It will only get worse, and he will only drift further toward authoritarian white nationalism as the election nears.

He sees it as his path to “victory.” Don’t let him be right. pic.twitter.com/2hPIdeAhUN

On the official White House account: “When the looting starts, the shooting starts.” This is a hellscape. https://t.co/j0LDGgCKEL

Then, the official White House account has repeated the words Donald Trump said as realdonaldtrump – “when the looting starts, the shooting starts” – perhaps to associate the full force of the office of the Presidency with them. I imagine Twitter rules will apply again.

Previous Minneapolis Mayor Blasts Trump For Calling Him Weak: Weakness Is Pointing At Others During A Crisis [VIDEO]
Next Roger Stone Must Surrender To Prison On June 30th