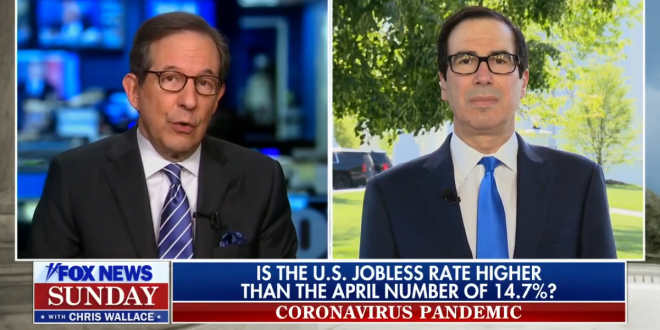 Wallace Grills Mnuchin: Are Your “Rosy Predictions” Based On Economic Reality Or The November Election?

“I’ve got to tell you, and I want to ask about a number of signs which indicate that the recovery is going to be much slower than that, sir. Job losses are not just in hospitality industry — airlines, restaurants, as you would expect — but they’re more widespread.

“The white collar and government sector, 3 million Jobs lost. Major retailers like Neiman Marcus and J Crew declaring bankruptcy. And the nonpartisan Congressional Budget Office says unemployment at the end not of this year, but of 2021, will still be 9.5 percent.

“Question, are your rosy predictions based on economic reality or the November election?” – Chris Wallace, interviewing Steve Mnuchin on Fox News Sunday. Mnuchin responded that said the second quarter is going to be “very, very bad” before things get better.