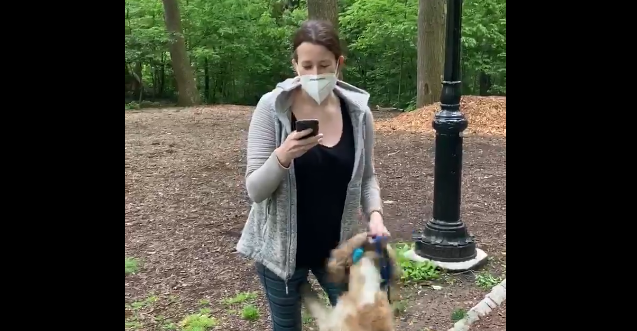 VIRAL VIDEO: Central Park Karen Calls Cops On Black Man Simply For Asking Her Put Her Dog On A Leash

A white woman called the NYPD and accused a black man of threatening her and her dog after an exchange that started when the man asked the woman to leash her dog in Central Park. Christian Cooper captured part of the exchange in a now-viral video that was posted to Twitter by his sister.

The woman, later identified as Amy Cooper, is shown on video asking Cooper to stop recording her, or she was going to call the cops and tell them “there’s an African American man threatening my life.” She repeated the statement several times, each time sounding more distressed, while appearing to call 911 dispatch.

Meanwhile, Christian didn’t appear to move any closer to Amy. He tells NBC New York that he’s an avid bird watcher who was in The Ramble, a popular spot in the park for birders, around 8 a.m. Monday morning.

This morning the clip below has over 20 million views. #CentralParkKaren is presently #2 on Twitter. At #1 is #AmyCooper.

Oh, when Karens take a walk with their dogs off leash in the famous Bramble in NY’s Central Park, where it is clearly posted on signs that dogs MUST be leashed at all times, and someone like my brother (an avid birder) politely asks her to put her dog on the leash. pic.twitter.com/3YnzuATsDm

My brother & I are so grateful for your concern! He is fine and left to continue birding after she leashed the dog, as he politely requested. I wanted folks to know what happened to make sure it never happens again from her. All she had to do was put her poor dog on the leash.

In response to an incident involving an employee on May 25th, Franklin Templeton issued the following statement. pic.twitter.com/8f2lMwK0r5

Don’t worry, the dog is in safer hands now. pic.twitter.com/NvP7jrCmCr

I’m glad to learn that your brother is safe. That this woman was willing to hurt her own dog in order to put him in jeopardy makes this even more pathological. Thank you for calling attention to the fact that calling the cops on black folks can constitute a threat on our lives.