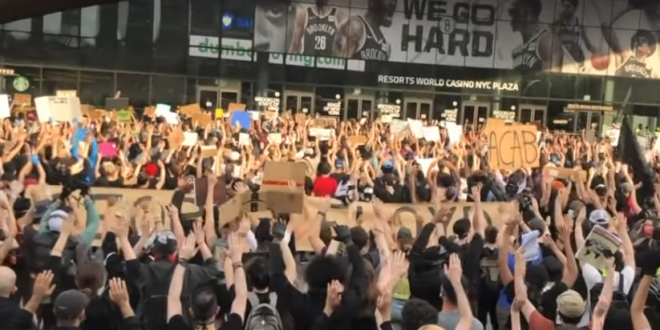 Violent protesters charged a Brooklyn police precinct on Friday night on a day when thousands of fed up New Yorkers hit the streets to protest police brutality and stand up for a man killed by Minneapolis police.

Several hundred police officers were rushed to the 88th Precinct in Clinton Hill, where protesters tagged police cars with profane graffiti like “F— the police,” broke their mirrors, and wrecked them. Between 50 and 100 people were arrested in the protest.

Members of a crowd estimated at 1,000 tossed bottles at police and sometimes stormed barricades outside Barclays Center. “How do you spell racist? NYPD!” they yelled. A slew of profane anti-police chants rang out above Atlantic Avenue, where cops put up metal barriers in front of the sports arena.

A massive crowd is gathering for justice for George Floyd and an end to police violence. We are at the Barclays Center in Brooklyn NYC. The crowd has their hands up and is chanting, “No justice, no peace.” I’ll be posting photos and videos throughout the protest. [thread] pic.twitter.com/JtL7f8038m

UNREST IN BROOKLYN – Protestors & @NYPDnews clash around the Barclays Center as people protest the police-involved death of George Floyd in Minnesota. Protestors threw objects at cops, police pushed back. Dozens arrested. There were several cops and protestors injured. #1010WINS pic.twitter.com/txSbmbIqEd