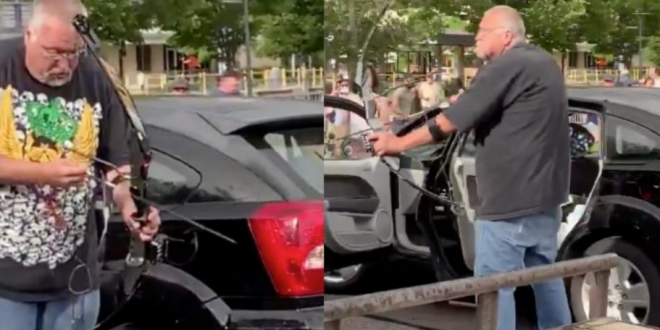 A white man declaring “All Lives Matter” during demonstrations in Utah on Saturday was detained by police after he aimed a bow and arrow at protesters.

Video footage of the shocking Salt Lake City incident shows Brandon McCormick standing in the street beside his vehicle as he begins to prepare his bow and arrow to apparently use it on a protester.

Just as he begins to shoot his hunting bow, protesters dashed toward him and attacked him in a chaotic scene. It was not clear, however, if he successfully fired an arrow. Another angle shows protesters hiding behind vehicles to protect themselves.

“First, I got beat up when I yelled ‘All Lives Matter’,” McCormick told KSL-TV on Saturday. “Then I pulled out weapons and I got beat up some more. The cops grabbed me and my car got totaled. I lost everything, coming down here to try to protect [officers] with what weapons I had.”

McCormick added: “I back up the law enforcement. I know some cops are bad. I know some people are racists are bad.” He later told Deseret News: “I came down here originally to help the cops. But, all I did was yell out, ‘All lives matter’ and I got beat up by black people.”

BREAKING: Video out of Salt Lake City shows a man readying to aim a bow & arrow at demonstrators as he yells “all lives matter” – demonstrators jumped him and then set his car on fire. Police responded. pic.twitter.com/ErGUuygkVs

turns out the bow and arrow guy, Brandon McCormick, pulled the same stunt earlier today, but with a machete or other very large knife instead. pic.twitter.com/4N4gqws6nH

This is the guy who shot arrows into the crowd in SLC today. This man is dangerous and stupid enough to act on his crazy beliefs.#BrandonMcCormick @slcpd why has this man not been arrested after clear video evidence shows him shooting arrows at people?https://t.co/L0aK47Gtw0 pic.twitter.com/nxA7quEllH

Here is is lying that he said it from his window & never mentioned his weapon was a bow aiming at people. pic.twitter.com/DsnUy2Os4i