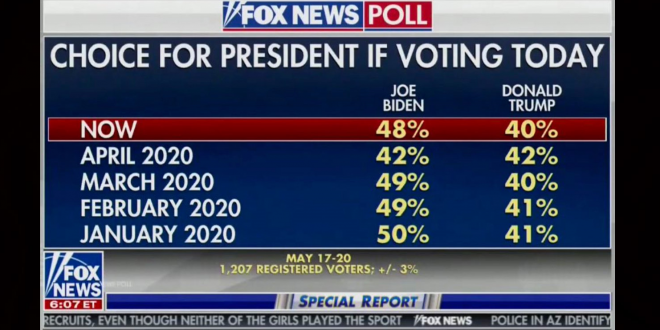 President Donald Trump’s net approval rating has sunk by a whopping ten points in the latest Fox News poll, while former Vice President Joe Biden has opened up a significant lead in that same poll.

And in the same poll, Joe Biden now leads Trump by eight points, 48 percent to Trump’s 40 percent, in a head-to-head presidential match. That’s up eight points from April, when Biden and Trump were tied at 42 percent.

Previous Biden To Radio Host: If You Have A Problem Figuring Out If You’re For Me Or Trump “Then You Ain’t Black”
Next UK Vaccine Moves To Advanced Human Trials Stage