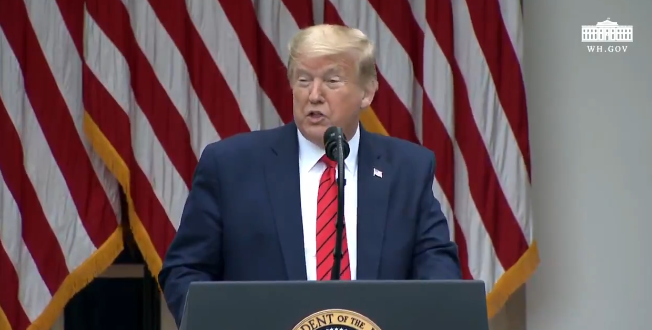 Trump: “We Have Met The Moment And Prevailed”

Donald Trump, on the day the U.S. death toll from COVID-19 passed 80,000, declared success in the war on coronavirus: “We have met the moment and we have prevailed.”

One week ago today, the impeached and manifestly unfit president of the U.S. said it was too soon to declare “mission accomplished.”

But today, victory has been declared, even as the bodies pile up, with no plan for the pandemic and no end to the pandemic in sight. “We will transition into greatness — that’s a phrase you’re going to hear a lot,” Trump said today in the White House Rose Garden.

Previously his son-in-law Jared Kushner said the administration’s response was a “great success story.” At that point deaths were at 58,000. pic.twitter.com/G52OwL3Nf2

Countries that have done more coronavirus testing per capita than the U.S.

Trump is asked about the comment he just made when he said: “In every generation, through every challenge and hardship and danger, America has risen to the task. We have met the moment and we have prevailed.” He says he meant they have “prevailed on testing”

Previous TX Man Fired Over Threat To Shoot Grocery Over Masks
Next Tesla Reopens Factory In Defiance Of CA County Orders, Musk Says If Anyone Is Arrested, It Should Be Only Him