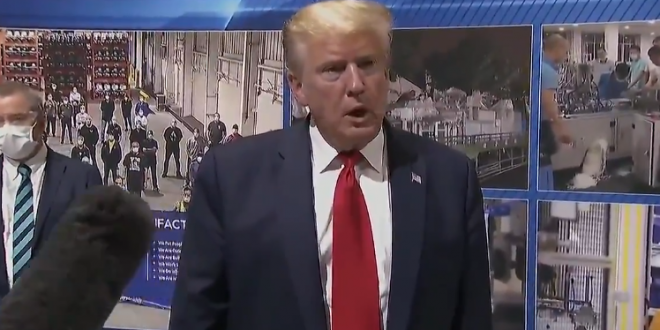 Trump Tours MI Ford Plant Without Mask: “I Didn’t Want To Give The Press The Pleasure Of Seeing It” [VIDEO]

Trump visited Ypsilanti, outside Detroit, to tour a Ford Motor Co. factory that had been repurposed to manufacture ventilators, the medical breathing machines governors begged for during the height of the COVID-19 pandemic.

His arrival came amid a long-running feud with the state’s Democratic governor and a day after the president threatened to withhold federal funds over the state’s expanded vote-by-mail effort. And, again, the president did not wear a face covering despite a warning from the state’s top law enforcement officer that a refusal to do so might lead to a ban on Trump’s return.

“I didn’t want to give the press the pleasure of seeing it,” President Trump says while touring the Ford plant. He claims he wore one when he wasn’t around reporters.

Journey is blasting as Trump answers questions during the Ford tour. They’re trying to recreate the rally feeling for him. pic.twitter.com/zEQ1aji8Ua

WATCH: Trump says it’s “not necessary” to wear a face mask as he tours Ford’s plant in Ypsilanti, Michigan, where the automaker is building ventilators. He added he had worn one earlier in the day, in a different area pic.twitter.com/Dz5H32cQcV

Standing in front of a group of Ford executives who are *all* wearing protective masks, Trump claims he wore a mask “before” in “this back area.” Pressed on the unverified claim (he hasn’t been photographed wearing one), Trump said, “I didn’t want to give the press the pleasure.” pic.twitter.com/IPgjNzN1Uk

Previous #QAnon Nutbag US Senate Nominee Denies She’s A #QAnon Nutbag: You Took Me Out Of Context [VIDEO]
Next Pentagon Rescinds Ban On Recruits Who Had COVID