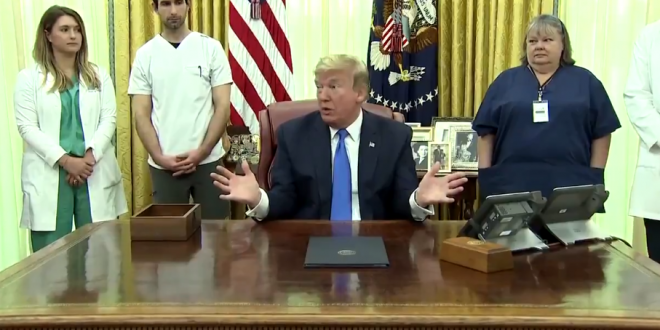 President Trump attempted to correct a nurse practitioner who said personal protective equipment is “not ideal” in parts of the country, and said she has been reusing her own N95 mask for “several weeks.” The president also called reports of PPE shortages “fake news” during his Oval Office event intended to honor nurses on the front lines of the pandemic on National Nurses Day.

Sophia Thomas, the president of the American Association of Nurse Practitioners who works at a community health center in New Orleans, explained to the president how they have to reuse personal protective equipment. “I think it’s sporadic,” Thomas said when asked how the PPE supply is now. “As I talk to my colleagues around the country certainly there are pockets where PPE is not ideal.

President Trump: “There’s nothing I can do to satisfy the media, the Democrats, or the Fake News. And I understand that.” pic.twitter.com/m8xDlmjUVe

At an event marking #NationalNursesDay at the White House, President Trump contradicted a nurse who said the availability of personal protective equipment has been ‘sporadic’ pic.twitter.com/hAKTybRDYp