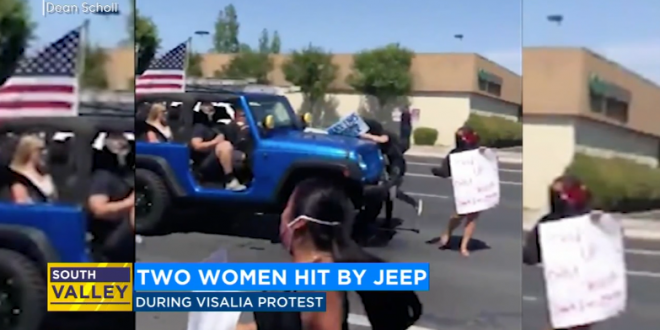 Shocking footage has emerged of Donald Trump supporters running over two protesters who had taken to the streets calling for justice over the death of George Floyd.

The footage, which was shared on Twitter, appears to show three people driving through the protests in a blue Jeep with a US flag and a Trump ‘Keep America Great’ flag attached to the rear of the vehicle.

Several protesters are seen holding placards in the road, before the driver of the Jeep comes to a stop in traffic. He then accelerates and plows into a young woman, who appears to be struck front-on by the vehicle and is mowed to the ground.

The Visalia Police Department said it is investigating the incident but no arrests have been made. Video shows three people in the Jeep, which had an American flag, as well as a Trump “Keep America Great” flag, attached and on display. Visalia police declined to release any names of the suspects, citing an ongoing investigation.

But Visalia police public information officer Celeste Sanchez did add that none of the occupants in the Jeep are children of Visalia police officers, as inaccurately claimed on social media. The women who were hit by the Jeep suffered minor injuries, according to Visalia police.

We aware of the incident that occurred involving a blue Jeep and protesters earlier today.

The two adult females both received minor injuries. The incident is being investigated by our Traffic Unit.

None of the occupants in the Jeep are children of a Visalia officer. Thank you. pic.twitter.com/97NoKslnEN

***WARNING: THIS VIDEO MAY BE DISTURBING TO SOME VIEWERS***
During a demonstration today in Visalia over the death of George Floyd, this jeep was captured on camera apparently trying to run over a protester. pic.twitter.com/FFogVAQb3p

INTENSE ENCOUNTER: Karina says she was hit by a Jeep during a George Floyd demonstration in Visalia. According to her, the Jeep pulled up to protestors, started heckling them and the crowd turned on them. The car then took off hitting Karina, leaving her with leg bruises. @ABC30 pic.twitter.com/xX9hCLs0uu

Hey @realDonaldTrump look at one of your supporters running over protesters in Visalia, CA. Are you proud of this? STEP UP, YOU COWARD. #BlackLivesMatter #ACAB #NotMyVideo pic.twitter.com/aE80m4k4pf