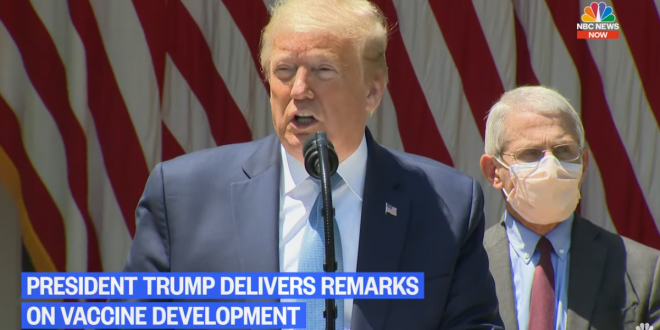 Trump Shrugs Off Vaccine Hunt: COVID Will “Go Away”

President Donald Trump said the the U.S. will overcome the coronavirus crisis with or without an effective vaccine, claiming that the disease will “go away at some point” either way.

“We think we’re going to have a vaccine in the pretty near future, and if we do we’re going to really be a big step ahead,” Trump told a reporter Friday at a White House event detailing U.S. efforts to develop a vaccine.

“And if we don’t, we’re going to be like so many other cases where you had a problem come in, it’ll go away at some point, it’ll go away,” Trump said. “It may flare up and it may not flare up, we’ll have to see what happens, but if it does flare up we’re going to put out the fire and we’ll put it out quickly and efficiently. We’ve learned a lot.”

Pres Trump: “It’ll go away. It may flare up. And, it may not flare up…But if it does flare up, we’re going to put out the fire. And, we’ll put it out quickly and efficiently. We’ve learned a lot.”

(Experts say 2nd wave is likely coming in fall & it is not under control now.)

Asked what he meant by “vaccine or no vaccine, we’re back,” Trump explains that with a vaccine, we’ll be “a big step ahead,” and without a vaccine, “it’ll go away at some point, it’ll go away,” and there may be “fires” but “we’ll put it out.” ?

Trump is still out here claiming that the coronavirus will go away on its own pic.twitter.com/8bbFtQJBH6

“Other things have never had a vaccine and they go away,” @realDonaldTrump says at a rose garden event to tout effort to speed vaccine production.

Trump offers some remarkably callous comments about the US coronavirus death toll, which currently sits at 86,607: “It’s a very, very small percentage. I say it all the time — it’s a tiny percentage. The vast majority — many people don’t even know they have it.” pic.twitter.com/b7fSqGNJMs