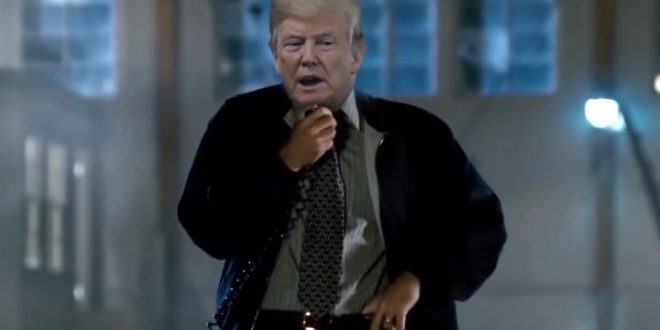 Trump Photoshops Himself Into “Independence Day”

The latest from our relentlessly infantile leader:

President Trump on Saturday posted a heavily doctored clip from the 1996 movie “Independence Day” featuring himself as Bill Pullman’s character delivering a motivational speech to GOP allies, who were also photoshopped into the video.

Charlie Kirk from Turning Point USA, Tucker Carlson and Sean Hannity from Fox News, and several other Republican allies can be seen gawking at Trump’s “speech,” which is actually Pullman’s monologue from the film.

We’re going to guess that Trump doesn’t know that the White House explodes in the first few minutes of the movie.

Previous Obama: COVID Has Torn Back The Curtain On The Idea That The People In Charge Know What They’re Doing
Next NIH Head: Large-Scale Vaccine Testing To Begin In July