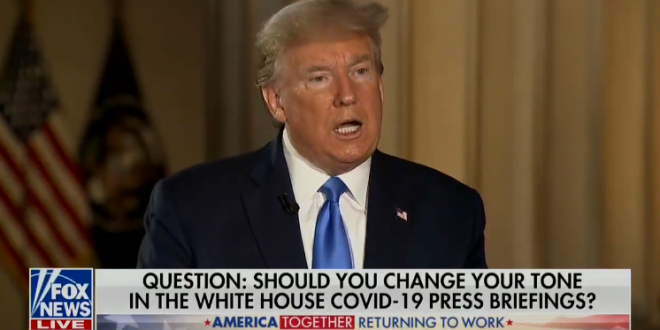 President Donald Trump’s town hall on Sunday was not his first with Fox News, but it was the first event of its kind at the Lincoln Memorial. That’s why, in Trump’s long battle against the “fake news media,” one of his comments stood out.

Responding to a question of whether he should change his tone during the COVID-19 press briefings, he said, “I am greeted with a hostile press, the likes of which no president has ever seen.”

“The closest would be that gentleman right up there [pointing to the David Chester French statue]. They always said, Lincoln, nobody got treated worse than Lincoln. I believe I am treated worse.”

Trump at the Lincoln Memorial is just a reminder of how tragically and completely he has debased the office that Lincoln once held.

Donald Trump on Fox News at the Lincoln Memorial. This has to be the opening scene for whoever writes the definitive History of the Decline and Fall of the American Republic.

An elementary school teacher who tells him that she really supports him and prays for him asks him to stop being a bully and stop rambling and to let go of his negative behaviors.

I am not making this up.

Asked (by a fan of his!) why he uses the language of bullies and doesn’t directly answer questions, Trump doesn’t answer the question but says “I am greeted with a hostile press the likes of which no president has ever seen,” then claims “I am treated worse” than Abraham Lincoln. pic.twitter.com/yuIsmo5JFt

Asked what he thinks about the criticism of holding a Town hall in front of the Lincoln Memorial, Trump says – and I am not making this up – that he had no idea, and he thought Fox picked the venue.

The inscription above Lincoln reads, “ In this temple, as in the hearts of the people for whom he saved the Union the memory of Abraham Lincoln is enshrined forever” There will be no encomiums or remembrances for Trump. His legacy will be dishonor, failure and division.

The Lincoln Memorial is one of the nation’s most hallowed sites. It honors the president who freed slaves and united the country, and was host to civil rights history. Tonight Trump is staging a “big show” inside the memorial and complaining he’s treated worse than Lincoln.

Nothing speaks to Fox News’ failure to even pretend to be a credible “news source” more than hearing to Donald Trump claim he’s been treated worse than Lincoln and not asking a follow-up on that one.

Previous CHATTER AWAY: Overnight Open Thread
Next In Honest Abe’s Shadow, Trump Out-Lies Even Himself