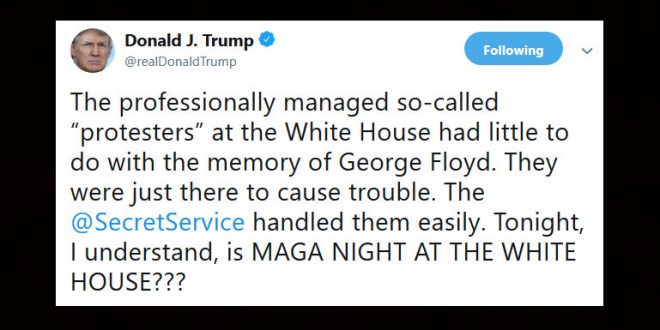 President Trump on Saturday praised the Secret Service for its protection of the White House during protests in Washington D.C. on Friday night, calling them “very cool & very professional” — and warned that any protesters who breached the fence would have met by “vicious dogs” and “ominous weapons.”

He later accused the protesters of being “professionally managed” and said cryptically that “Tonight, I understand, is MAGA NIGHT AT THE WHITE HOUSE???”

The fiery tweets by Trump come a day after he had caused controversy by saying that “THUGS are dishonoring the memory of George Floyd” and warned: “Any difficulty and we will assume control but, when the looting starts, the shooting starts.”

The professionally managed so-called “protesters” at the White House had little to do with the memory of George Floyd. They were just there to cause trouble. The @SecretService handled them easily. Tonight, I understand, is MAGA NIGHT AT THE WHITE HOUSE???

Is MAGA night at the White House your invitation to and incitement of more violence where because of you Americans will die?

It took you three times to tweet this elementary school, mindless, gibberish, the morning after the nation burned in civil unrest because of systemic racism.

You are simultaneously an inhumane, racist, white supremacist and a cerebrally challenged, blithering, idiot. https://t.co/NQK7ORmNFT

And when a black man is so brutally lynched for millions to see that even the Amish come out to protest when they don’t even have cellphones or TVs, you don’t ask if it’s “MAGA NIGHT AT THE WHITE HOUSE??” Trump daring and defiantly egging on the protestors is dumb and heartless.

He just invited his MAGA cult to come to the WH tonight to basically go against protesters. Trump is trying to create a violent confrontation between Americans.

The United States has no President at this time.

We’ve said this time and time again, but Twitter has to suspend Trump. He’s calling for MAGA to protest tonight. These are the same people who were walking around with guns protesting stay at home orders. People are going to die.

He’s saying “I need all of my rube followers to come to the White House, put your lives at risk, and escalate this. I have no idea wtf I’m doing, but the longer this goes on, the less people will talk about my failures.”