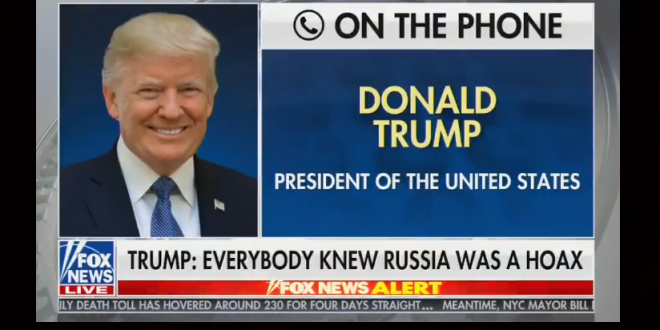 Trump: “I Learned A Lot From Richard Nixon” [VIDEO]

“Jeff was just very weak and very sad and when the name Russia was mentioned, he immediately, instead of being a man and saying this is a hoax, he recused himself and he had a deputy named Rod Rosenstein who probably, I mean, you’ll see things coming out.

“Of course there was one difference — one big difference — number one he may have been guilty and number two he had tapes all over the place. I wasn’t guilty, I did nothing wrong, and there are no tapes, but I wish there were tapes in my case. But I learned a lot from Richard Nixon.

“They were ratting on each other, they were going crazy, it was like throwing a rock at a hornets nest. Had I not fired him I probably wouldn’t be speaking to you right now, other than maybe I’d be talking to you about the private sector because I’d be in the private sector had I not, because this was a takeover.

“This was the takedown of a duly-elected president of the United States.” – Donald Trump, calling in this morning to Fox & Friends.

TRUMP: “I learned a lot from Richard Nixon — don’t fire people. I learned a lot. I study history … of course there was one big difference: Number one he may have been guilty and number two he had tapes all over the place.” pic.twitter.com/wgzKCumavL

Nixon only wished for the corrupt Senators Trump has in his pocket.