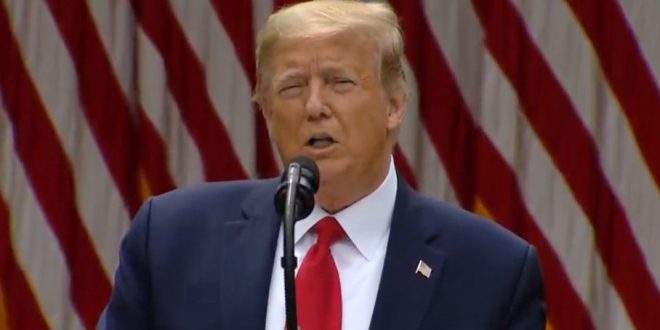 Trump Declares US Has “Terminated” Relationship With WHO, Flees Alleged Presser Without Taking Questions

President Trump has announced the United States is terminating its relationship with the World Health Organization and directing its payments to other public health organizations.

Last month President Trump announced that he would be instructing his administration to withhold funding for the World Health Organization while the White House investigates the organization’s role in how it handled the spread of the COVID-19 coronavirus.

Trump alleges “mismanaging” and “covering up” by the WHO on the virus’ spread. America provides between $400 and $500 million to the WHO annually, the president said. Trump added China contributes roughly $40 million to the organization per year.

As you can below, Trump tried to clean up his “shoot them” tweets just before walking out for what was supposed to be a press conference.

Looting leads to shooting, and that’s why a man was shot and killed in Minneapolis on Wednesday night – or look at what just happened in Louisville with 7 people shot. I don’t want this to happen, and that’s what the expression put out last night means….

….It was spoken as a fact, not as a statement. It’s very simple, nobody should have any problem with this other than the haters, and those looking to cause trouble on social media. Honor the memory of George Floyd!

So … Trump completely ignored all that is happening in America, focused on China, and left, taking no questions. Wow.

Trump finishes his prepared remarks, which were solely about China, and walks away without taking questions. That was not a press conference, that was a statement.

President Trump makes his remarks on China, does not address Minnesota and turns and leaves the Rose Garden without taking any questions. Aides this morning had expected him to address it.

BREAKING: “We will be today terminating our relationship with the World Health Organization” and redirecting funds, Pres. Trump says. The announcement followed comments in the Rose Garden highly critical of China. https://t.co/zYfUs886AF pic.twitter.com/YMNVZa8D18

Trump just blew off what the WH has called a press conference. Clearly knew his cleanup tweet wasn’t going to fly.