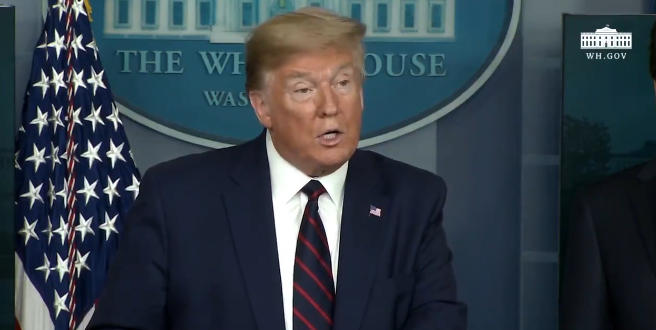 Trump Claims He Never Got Early Warnings On COVID

Donald Trump pushed back on Sunday against recent reporting that intelligence officials were issuing classified reports to his administration as early as last November warning about the early outbreak of coronavirus in the Wuhan province of China.

The president also claimed the restrictions he placed on travel to the US from China in January have saved “tens of thousands” of American lives, which he has used as a data point to defend against criticism that he did not take the threat of the coronavirus seriously.

The US military’s National Center for Medical Intelligence compiled a classified report on the spreading contagion in November 2019 through analysis of wire and computer intercepts in the Wuhan region, ABC News reported in April.

Intelligence has just reported to me that I was correct, and that they did NOT bring up the CoronaVirus subject matter until late into January, just prior to my banning China from the U.S. Also, they only spoke of the Virus in a very non-threatening, or matter of fact, manner…

….Fake News got it wrong again, as always, and tens of thousands of lives were saved by my EARLY BAN of China into our Country. The people that we’re allowed were heavily scrutinized and tested U.S. citizens, and as such, I welcome them with open arms!

The first US case was January 15. But apparently officials forgot to alert the president of the United States about the spread of a global pandemic into this country.