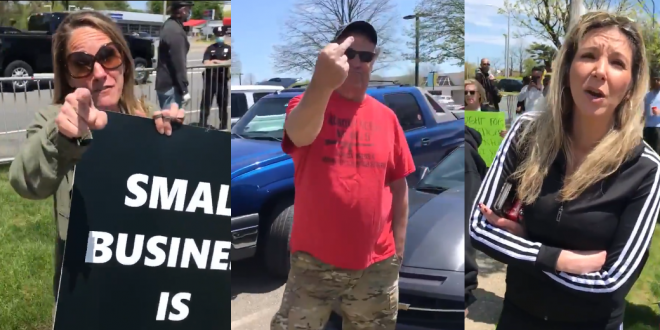 President Trump shared a video of a local TV reporter being confronted by anti-shutdown protesters in Long Island who called him “fake news” and “the enemy of the people,” prompting journalists to come to the reporter’s defense on Friday night.

Several protesters sported Trump campaign flags and apparel, while some visibly angry demonstrators used anti-media rhetoric frequently employed by the president. According to a video taken at the event, several protesters referred to Vesey as “fake news” and one person shouted: “You are the enemy of the people!”

People can’t get enough of this. Great people! https://t.co/b4HM0C298h

87,000 Americans dead, 1.3 million infected, and the president is attacking a local TV news reporter who was trying to do his job and cover a protest. Indecent, vile. https://t.co/fPBfz0MWak

It’s discouraging enough to watch the tape of these knuckledraggers harassing a reporter who’s just doing his job by covering their protest (and who produced an even-handed segment for his local newscast).

But to see the President pile on, bullying a civilian… it’s nauseating. https://t.co/XCdsqwAqqO