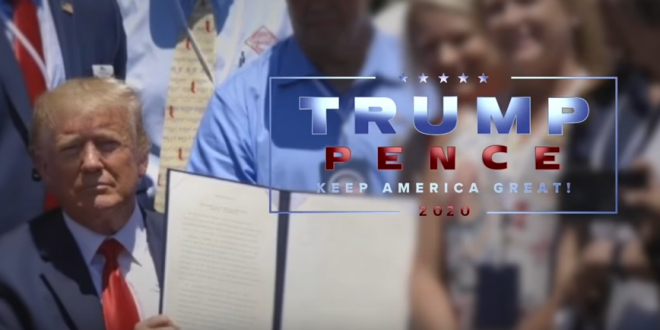 The ad takes a segment from CNN’s “The Situation Room” out of context. On March 30, anchor Wolf Blitzer asked Dr. Sanjay Gupta, “Well, is it accurate that if these steps had not been put in place, the stay at home orders, the social distancing orders, as the President said yesterday, it could have been 2 million people dead here in the United States?”

Gupta responded, “I mean, you know, these are all models, Wolf. It’s a little tough to say, but, you know, if you talk about something that is spreading, you know, very robustly throughout a community. You know, two to three times more contagious than flu, and up to 10 times, perhaps even more than that, more deadly than flu, then yes.”

Blitzer’s question was about “stay at home orders” and social distancing, but in the campaign ad, that portion of his question was omitted. Blitzer is heard asking, “Is it accurate that if these steps had not been put in place … it could’ve been 2 million people dead here in the United States?” And Gupta is heard saying, “yes.”

Meanwhile, the Trump campaign is suing a Wisconsin TV station for an ad they say takes Trump’s “hoax” statement out of context.

CNN is EXTREMELY triggered by this new ad!

It’d be a shame if we kept sharing it…

Previous CHATTER AWAY: Overnight Open Thread
Next GOP US Rep Sues Over Michigan Gov’s Lockdown Order Because He Can’t Seek Treatment For His Osteoarthritis