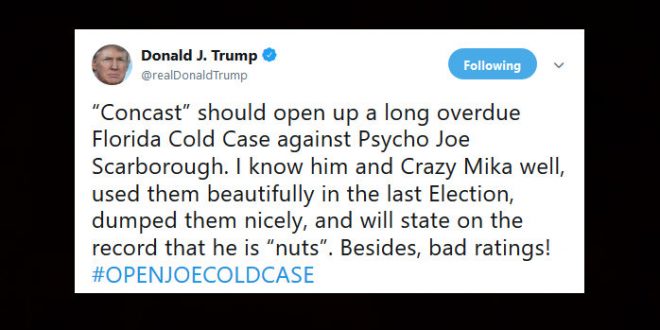 President Trump on Monday took a shot at MSNBC’s Joe Scarborough – calling for “Concast” to probe him for a cold case involving the accidental death of an intern in his congressional office in 2001.

The president appeared to be referring to the case of Lori Klausutis, a 28-year-old intern who was found dead in Scarborough’s Fort Walton Beach office in Florida when he was a congressman.

The medical examiner ruled the death accidental, saying Klausutis had passed out because of an undiagnosed heart condition and hit her head on a desk. No evidence has ever been found linking Scarborough to her death.

Scarborough responded to the tweet on air, calling it “extraordinarily cruel” and saying it played into Trump’s pattern of attacking his enemies with conspiracy theories.

“You, once again, drag a family through this and make them relive it again, just like Seth Rich’s parents. As if losing a loved one the first time isn’t enough,” Scarborough said. “But this weekend, my God, you were supposed to have a working weekend. You got it wrong again.”

After mocking Trump’s attacks and his incorrect statements throughout the pandemic, Scarborough took things up a notch by saying “Mr. President, you’re getting worse every day.”

“Concast” should open up a long overdue Florida Cold Case against Psycho Joe Scarborough. I know him and Crazy Mika well, used them beautifully in the last Election, dumped them nicely, and will state on the record that he is “nuts”. Besides, bad ratings! #OPENJOECOLDCASE

This moment of ‘Healing’ brought to you by Clorox Bleach.

Jack Webb voice: “Mr. Scarborough, I’m here to investigate that death the police determined accidental in 2001.”
“Are you — with the FBI?”
“No sir, I’m a senior VP at Comcast.”

Previous DOJ Files Brief In Support Of Virginia Church: The State Has Given “No Good Reason” To Ban In-Person Services
Next 23rd US Diocese Declares Bankruptcy Amid Lawsuits