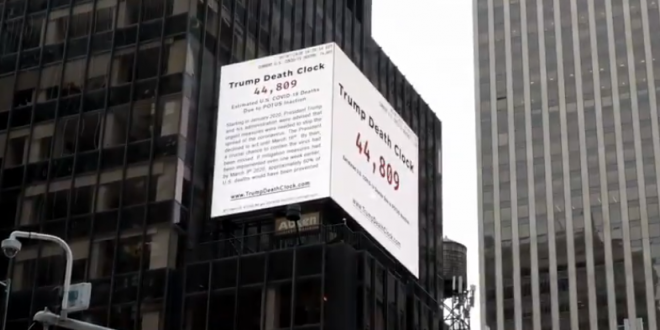 A newly erected billboard in New York’s Times Square shows the number of US coronavirus deaths that its creator says could have been avoided if President Donald Trump had acted sooner — and it’s called the “Trump Death Clock.”

Created by filmmaker Eugene Jarecki, the “clock” was installed on the roof of a Times Square building, empty due to the pandemic. As of Monday, the counter showed more than 48,000 deaths out of a total of more than 80,000, by far the highest tally in the world.

The “clock” ticks on the assumption that 60 percent of COVID-19 deaths in the United States could have been prevented had the Trump administration implemented mandatory social distancing and school closures just a week earlier than it did.