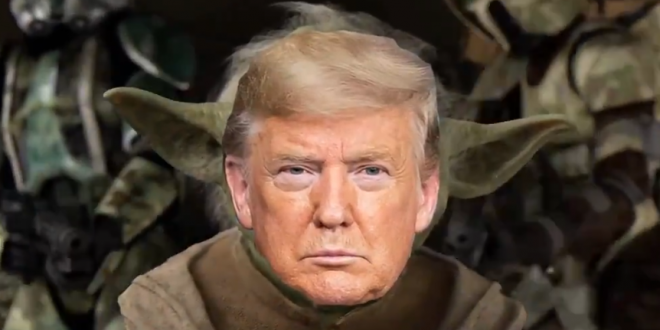 President Trump’s campaign tweeted out a video Monday showing the president as Yoda decapitating cable news networks. The video, timed for May 4 and “Star Wars Day” and taken from a scene from “Star Wars: Episode III Revenge of the Sith,” pastes the president’s face on Yoda.

It begins with presumptive Democratic nominee Joe Biden’s face on Emperor Palpatine as he directs a clone trooper, labeled with CNN’s logo, to execute Order 66 to kill the Jedi. The CNN clone trooper approaches Trump as Yoda, along with another clone trooper labeled with MSNBC’s logo, before Trump decapitates both troopers.

May The 4th Be With You! pic.twitter.com/TdFY5ojlgN

May the fourth be with you Patriots, imma stay home again. ✌️😆🙀 pic.twitter.com/2u8cq595cx

Previous Scott Lively: Christians Must Ready To Wage Violence Against Those Who Use COVID To Push For Socialism
Next Cuomo Outlines Four-Phase Reopening For NY State