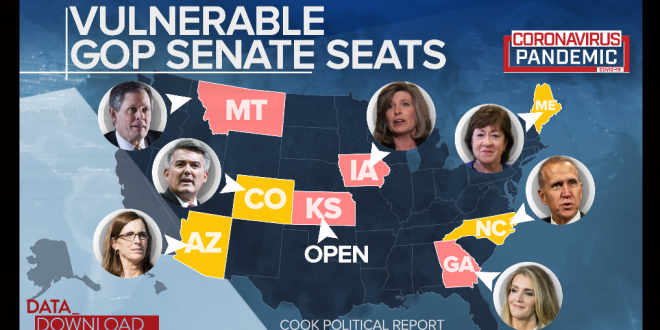 Back on February 5, when there was not yet a single reported case of COVID-19 in the United States, the Cook Political Report listed three Republican Senate seats as “Tossups” and three more as “Lean Republican.” By the end of April, that had shifted to four Republicans in “Tossup” races and four more in “Lean Republican” races. (The Democratic seat ratings did not move in that time.)

In February, Arizona’s Martha McSally, Colorado’s Cory Gardner and Maine’s Susan Collins were rates Tossups. Meanwhile, North Carolina’s Thom Tillis, Georgia’s Kelly Loeffler and the open seat in Kansas left by the departing Pat Roberts were all rated as Leaners. That’s pushed the number of endangered Senate Republicans from six to eight in a body where a three-seat swing could mean the loss of a majority.