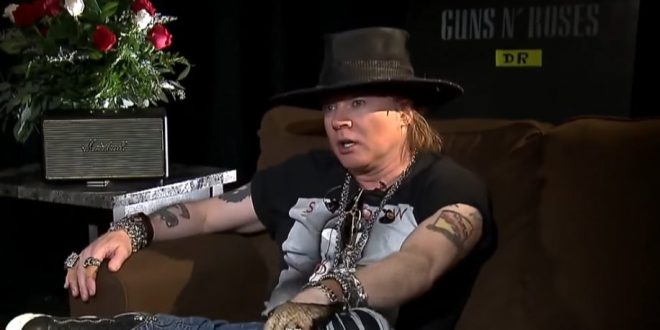 If you were wondering what else the year 2020 could throw at us, Wednesday night brought us the spectacle of Treasury Secretary Steve Mnuchin embroiling himself in a Twitter beef with Guns N’ Roses frontman Axl Rose.

The “Paradise City” singer kicked things off by blasting the former movie mogul, tweeting: “It’s official! Whatever anyone may have previously thought of Steve Mnuchin he’s officially an asshole.”

Moments later, Mnuchin chimed in: “What have you done for the country lately?” He deleted a previous tweet, which reportedly featured the Liberian flag instead of the U.S. Stars and Stripes.

It’s official! Whatever anyone may have previously thought of Steve Mnuchin he’s officially an asshole.

What have you done for the country lately? 🇺🇸

My bad I didn’t get we’re hoping 2 emulate Liberia’s economic model but on the real unlike this admin I’m not responsible for 70k+ deaths n’ unlike u I don’t hold a fed gov position of responsibility 2 the American people n’ go on TV tellin them 2 travel the US during a pandemic.

Um. Not delay relief checks to desperate Americans so that the president could write his name in the memo line?

The most glorious part of all this is knowing that every locker Steven got shoved into had a poster of Axel Rose inside it.

He didn’t fly to Fort Knox on a government jet so his wife could see an eclipse.

You, Steven, are a corrupt, lying scumbag who steals from taxpayers then thinks a pathetic little flag emoji covers that up. You belong in jail and we all hope someday you rot there.

We know what you’ve done to the country. Hopefully there are trials after Trump loses that include you too!

You need to raise funds to teach @stevenmnuchin1 which country he is pretending to be from. pic.twitter.com/U3blf3lkBR