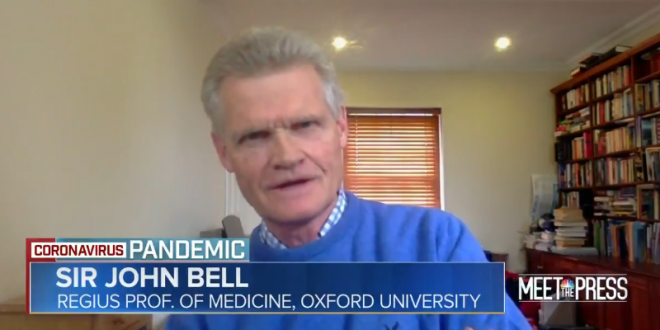 British scientists developing a potential vaccine for the coronavirus hope to see a “signal” as to whether their vaccine candidate is working by June, one official involved in the effort told “Meet the Press” Sunday.

Sir John Bell, the Regius Professor of Medicine at Oxford University, where one of the leading efforts to develop a vaccine is underway, said that the prospects for its candidate are “pretty good” and that “as every day goes by, the likelihood of success goes up.”

The researchers hope to have enough data from their phase-two trials that “we would get evidence that the vaccine has efficacy by the beginning of June.”

EXCLUSIVE: Professor Sir John Bell of Oxford University says “the prospects are pretty good” for the development of a COVID-19 vaccine. #MTP #IfItsSunday

Sir Bell: “We are gradually reeling it in, bit by bit and as everyday goes by, the likelihood of success goes up.” pic.twitter.com/SSmKN9XVgT

Previous Pompeo: Enormous Evidence Virus Is From Wuhan Lab
Next Larry Kudlow Defends Downplaying Pandemic: When I Said It Was Contained It Was True At The Time [VIDEO]