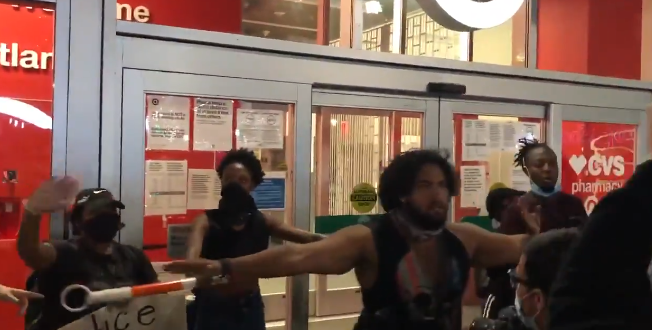 Peaceful demonstrators barred violent looters from breaking into a Brooklyn Target during chaotic protests over the death of George Floyd, video shows.

In the video shot late Saturday, about 10 outnumbered protesters form a line and barricade angry looters from breaking into the Target at the Atlantic Terminal Mall in Downtown Brooklyn.

After a few minutes of heated exchange, the would-be looters abandoned the Target and made their way toward Fort Greene park, according to Andrew Solender, a reporter for Forbes who witnessed the clash.

The clip has 5.5 million views.

Some protestors in Brooklyn calling to loot the Target, but organizers are rushing in front of the store to stop them, keep things non-violent #nycprotest pic.twitter.com/6x70cpcjep