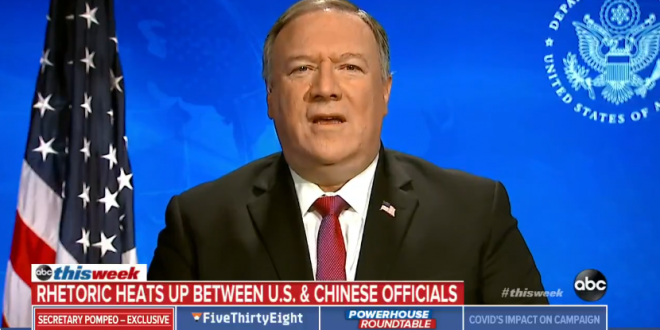 U.S. Secretary of State Michael Pompeo said “enormous evidence” shows the novel coronavirus outbreak began in a laboratory in Wuhan, China, but didn’t provide any proof for his claims.

“I can tell you that there is a significant amount of evidence that this came from that laboratory in Wuhan,” Pompeo said on ABC’s “This Week.” “These are not the first times that we’ve had a world exposed to viruses as a result of failures in a Chinese lab.”

Pompeo stopped short of saying the virus was man-made, noting that he agreed with a report by the Office of the Director of National Intelligence that ruled out genetic modification or it having been man-made.

NEW: Secretary of State Mike Pompeo tells @MarthaRaddatz China “did all that it could to make sure the world didn’t learn in a timely fashion” about COVID-19.

“It was a classic communist disinformation effort,” he adds and they will be held “accountable.” https://t.co/EKV20Fhx2H pic.twitter.com/YrQRGkeYNk

Previous Birx Says Protesters Without Masks Are “Devastatingly Worrisome,” Restates Projection Of Up To 240K Deaths
Next Researcher: Vaccine Could Show Efficacy By Early June